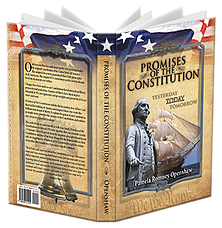 Fresh off the Press!
New episodes from Promises of the Constitution
"Promises Podcast 003 - Are There 2 Constitutions?"

Be one of the First to follow this intriguing discussion of stories that matter and how they relate to our day! 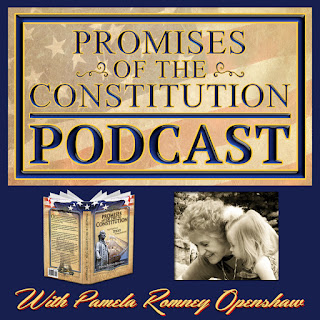 Posted by Unknown at 2:09 AM No comments:

If You’re a Moral Person, the Feds Don’t Want You in Power…

The Chief Justice of the Alabama Supreme Court, Roy Moore, has been disciplined for a “crime” with a punishment that is ugly, vindictive and far beyond reasonable. But worse, Judge Moore’s “crime” isn’t a crime at all, making this sordid affair almost unbelievable. The media has remained silent on the matter.
Just what was Judge Moore’s egregious crime? He followed both the US and Alabama Constitutions. He told probate officers in his state to ignore federal orders concerning gay marriage. He refused to step aside and capitulate to federal officers who violated state and federal laws to control marriage in Alabama.
This was not Judge Moore’s first action to defend the law. In 2003 he refused to remove a monument bearing the Ten Commandments from a state building—another unconstitutional demand.
Judge Moore has been suspended from his position as Chief Justice of the Alabama Supreme Court. The punishment imposed also denies him not only his salary, but benefits and retirement. While the court did not specifically prohibit his future as a judge, its members would know (being judges, themselves) that Alabama law prevents Judge Moore from serving in another judgeship because of his age (he will be past 70), and Judicial Canon prevents him seeking any employment outside his judicial role.
Thus, he cannot be a judge, he cannot get any job other than as a judge and he has no retirement or benefits. He is left with no way to provide for himself into his old age.
This punishment is inhumane.


As Usual, the Federal Government Goes Against the Constitution

The entire matter has been conducted as a clandestine, secret proceeding, with multiple violations of the law.  First, any punishment meted out requires the unanimous vote of the nine judges on the Alabama Court of the Judiciary. The vote was not unanimous. This, alone, should have dismissed the case. Second, the punishment was invented—it is unlawful. Third, the punishment is vindictive, hateful and extreme.
It is a serious matter when judges, whose duty it is to preserve law, violate it willfully. It is a serious matter when the federal government bullies states in matters where it has no voice or business. (It is also a serious matter when citizens passively allow this without crying out in disgust.)
Many Americans believe we must do what the federal government says. Not true. Instead, we must insist the government obey its law—the Constitution—which says the federal government has no authority in marriage policies. But states also violate laws, as Alabama has proven, and we must insist they obey the law, as well.
The government at all levels is bullying us. Judge Moore is a courageous pioneer, of sorts, who stood up to both the federal government and his state. Kim Davis, the Kentucky clerk who stood firm against issuing gay marriage licenses, did the same.
The issue is not gay marriage, it is obedience to law. Amendment 10 to the US Constitution makes all powers not specifically assigned therein to the federal government a matter for the states. Marriage is not assigned to federal authority; it is a state matter. Amendment 774 of the Alabama Constitution, the Sanctity of Marriage amendment, validates Judge Moore’s actions.


Without the Protection that Laws Provide, We’re in Trouble

Laws are protective barriers. Destroy one and all are in jeopardy of being wiped away, due to the precedent set. Laws protect family, property that is essential to provide for our needs, our right to worship God, to speak, to associate with others as we choose—everything about our way of life. The law must be preserved.
Judge Moore has been made an example by activists trying to change our way of life and community morals Liberty Counsel is defending him. Bless them for doing so—they deserve our thanks!
Posted by Unknown at 5:17 PM 1 comment: