As our nation races further from its moral moorings, things that were previously unacceptable will become acceptable, even fashionable.  Euthanasia--assisted suicide--is one of those. It is a slippery road to ugly things.

Once a society embraces the idea of getting rid of some people, its a minor matter to change the line between those valued and those of little worth. This terrible process--putting someone to death who is "unneeded"--will begin with a "mercy stance"--the soft, loving  "This will be so good for you" approach seen in the article that follows. Once this door is opened, however, it will lead to atrocities.

Be alert to this social movement and refuse it. We must not become a nation of mercy killings. Nations that do eventually change the meaning of mercy, and redefine it to justify their political and social goals. this gives ugly permission to end the lives of some who are deemed unnecessary. 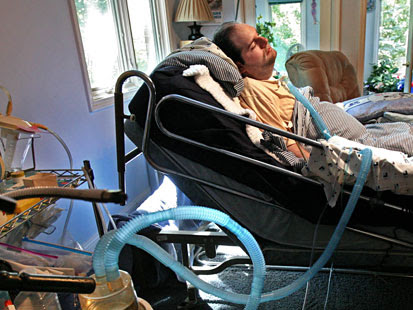 This article was republished in the Daily Herald under Media Voices:

We are hearing more these days about "death with dignity," which is a dignified way of saying it makes sense to breathe our last in the most painless and pleasant way possible under terms we control.
Techniques range from withholding life-sustaining medical intervention to more controversial but increasingly acceptable assisted suicide.
The latter got a lot of publicity recently when 29-year-old Brittany Maynard took her own life rather than suffer the ravages of brain cancer. She had moved to Oregon, one of five states where a doctor can legally prescribe drugs to end life. She did it consciously and with full support of loved ones, whose last memories of Brittany are of a person most comfortable and in most control who simply went to sleep. Brittany wanted to say goodbye on her own terms.
Society continues to struggle with this concept. Only in recent generations have we had the real option. Life in years past ended earlier and with less warning. Medical science lacked the means for preserving life as it can now, a new ability that brings great benefits but new challenges as well.
Too often today sick people and loved ones — and society in general — insist physicians do everything possible to keep an ailing patient alive even when hanging on is bad for all concerned. We all know of people in comas, in vegetative states, who are maintained indefinitely at great expense and trauma to loved ones. More common are people so old and mentally deficient their lives are a burden.
We all can imagine similar scenarios.
In such cases, everyone hangs on — for what? Would it not be better if, with everyone's consensus, an earlier decision would be made to peacefully end life at an appropriate moment? With a physician's instruction, a simple dose could be taken at bedtime, like a sleeping pill. This sort of goodbye could be much more pleasant for everyone.
We're getting there. States are beginning to consider life-ending legislation that will allow individuals and designated legal decision helpers to make a much better issue of the final moment.

Posted by Unknown at 6:48 PM No comments:

The 1st Amendment Through the Eyes of a Child

Here is a big Thank You to all our Veteran's who have defended our Constitution from all enemies, foreign and domestic. The new movie "American Sniper" has helped educate our public about war, and the restraint our military has shown in defending freedom all around the world.

Posted by Unknown at 7:31 AM No comments: