Nevada’s Cattle: The Rest of the Story

I was in a meeting last night with Sheriff Richard Mack and heard the rest of the story on the Cliven Bundy matter in Nevada. The Bundys are the last of 53 ranchers that lived and ranched that area with their cattle—the others have all been driven off by the federal government. The stsory was difficult to hear.

Sheriff Mack was 20 minutes away from ground zero, stopped still in freeway traffic that was at a halt because of the incident. As he fretted, he received a call from a 15 year veteran of the sheriff’s office at the Bundy scene, who told him: “They are going to kill us. Tell my wife I love her.”

Sheriff Mack jumped the traffic line and took to the shoulder of the road behind emergency vehicles, including an ambulance, headed to the scene. When he arrived, the BLM (Bureau of Land Management) officers had left, without the incident having erupted. He relates the story as it was told to him.

The men and women with the Bundys were unarmed. The BLM and its SWAT team, with weapons, trained marksmen and military vehicles, had erected two corrals at the scene: one for the cattle, and one for humans—anyone who wanted to speak out in the expected conflict. A sign marked the second corral: “First amendment speech area”, and anyone who spoke without being put in the corral first would be arrested. 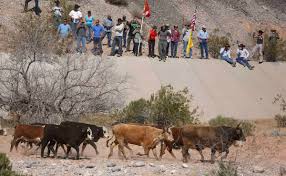 Note that this is a gross violation of constitutional rights—to deny a citizen the right to speak, under any circumstances. To herd that individual into a corral before some government official gives him permission to speak and threatens arrest if he speaks outside the corral is unbelievable. We are human beings, not cattle! No citizen of the United States should be treated that way!

The situation was unimaginably tense. Sheriff Mack later asked a reporter present at the scene if he really believed the BLM would fire on them. His reply:” We had no doubt.” At what was surely the last moment, a reporter called out, “You will be on film and remembered forever for shooting these innocent people!”

Nevada sheriff’s deputy Tom Roberts then stepped between BLM troops and the unarmed civilians and said to the federal officers: ”You are better than this.” The deputy then turned to Bundy and said, “What do you want us to do?” Bundy asked the federal officers to take 10 steps back, to cool the situation down. Roberts turned to the SWAT team and said, “It’s time for you to leave.” They did.

A lot of things jump out to the reader of this story. First, why does the BLM need a SWAT team and protective vehicles? Only to go to war with America’s citizens, and only if wrenching their rightful property from them.

Second, how many other people has this happened to? Stories rage across the country from other states, where the BLM has turned militant and is committing felonies against Americans over their private property.

Third, note the power of one man. One journalist had the sense and wits to show the federal troops the infamy that waited them. One other man, Deputy Tom Roberts, had the courage to intervene. Without either man, we might have Nevada and possibly the entire West might now be engaged in a war with federal troops.

Make no mistake: the federal government is in the wrong here. Cliven Bundy refused to pay federal land use fees because those fees were illegal. He paid the state costs—those were constitutional. Bundy took a stand against tyranny, just as did the Tea Party patriots more than two hundred and fifty years ago. He has set a pattern for us: peaceful but determined resistance to federal larceny. 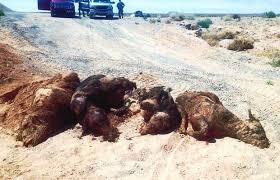 Last, what a travesty! Our federal government has turned to stealing property, treating Americans like animals, and threatening to murder innocent citizens to get their land. What has America come to?!
Posted by Unknown at 11:42 AM